This conversation is no longer open for comments or replies and is no longer visible to community members. The community moderator provided the following reason for archiving: Issue solved

I send already a private message to pixoto on the name of Diana Calvario and got no answer, so, I will get direct in here naming one guy, sorry.

If you go to the mobile photos category today you will see, that the "Player"
Paul Buaron
Johnrou Bechayda
John Rou

is leading alomost everywhere ... and I am saying IS because it is absolutely the same person ... and a very well known one as well!

I don't know why he does it. I suspect it's so he can vote on his own photos. He might submit the photo under one name and then change his name so that when he goes into image duel his own photos will appear as he submitted them under another name. I've seen some very strange voting on his pics too. They will just appear out of nowhere on the leader board!

I talked already to other Players I know from facebook and they are saying the same and trying to contact pixoto as well ... why there is no answer from you guys? This is not only annoying but frustrating to keep on posting stuff in here!

I can send you a printscreen of the three names all together here: 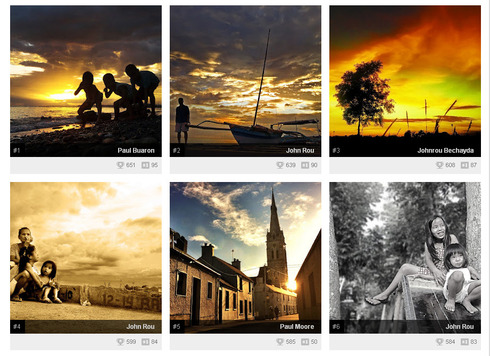 it clearly is the same guy with 3 names - they all have the same profile picture.
9 years ago

If he has the same profile picture then sure he is one person with different usernames.

The admin should look into this matter ASAP.
9 years ago

Is it the case of merger of profiles or some fraud? Please throw some light on this.
9 years ago

Hey Guys - this is indeed all the same person but the problem with the names is ours not his. When you change your name on Pixoto whatever name you have at the time of publishing stays in the image record and therefore displays on the leaderboard. You will noticed that if you click on the names it all takes you to the same profile page and that all of the images in question are on that page.

Yes but I am talking about three different names on the same day? ... All images where submitted today again? Is that possible? And why for anyones sake should someone be changing names all the time??? there must be a good reason for doing so ...

And then c'mon, his photos are definitely good ones but impossible to have them on the top all the time!

There's something in the air which is not right here ... He had already over 600 points in the morning while there where only some 10 pictiures in and all the others of us where not even at 300 ... and there where other nice shots there to compete ...
9 years ago

Then it's okay! Thanks!
8 years ago

oh, Ive just read this post. anyway, thanks Jason Kiefer for explaining on my behalf. I think that was the time when "resubmit" button was introduced and I was using John Rou as my user name. during that time I resubmitted some of my older photos on that same day. It was also my trouble that my older user names appeared on my resubmitted photos. but I think it's all cleared out now. :)