2019 is shaping up to be the year of the Vice President in the world of entertainment. The year will be highlighted by both the final season of Veep (2012) and the Oscar campaign behind Vice (2018), the first major film whose story line focuses on a sitting American Vice President. In celebration of second bananas everywhere:

EVEN MORE HONORABLE MENTIONS? Possible Future Option
He is confirmed in the role, but not currently
listed in credits. I am unsure of scope of role or
whether his scenes made the final cut or script.
No picture has been released as of yet.Bill Pullman
Vice Nelson Rockefeller Mark Camacho X-Men: Days of Future Past Richard Nixon Bradley Whitford All the Way Hubert Humphrey
2020-01-11T16:03:11+00:00

Many of your "real-life" choices were not Vice Presidents at the time of their performance, but actually Presidents. Seems like if you're focusing on VPs you should only include titles where the character IS actually a VP.
2018-10-13T07:48:16+00:00

The only qualification for inclusion in the real-life or the fictional poll is portrayal of someone who will be, is or was an American Vice President. Their story line within the movie or TV series can be about any part of their lives.It can be about their life before, during or after they held the Vice President position or all of the above. Plus, the introduction clearly states that movies that focus only on the period as a sitting real-life American Vice President to date don't exist, Vice will be the first. Even Veep, the only TV series that focuses on a sitting American Vice President has more episodes dedicated to the title character when she wasn't Vice President than when she was.The only reason most of these portrayals exist is most notable Vice Presidents often become Presidents. I don't find it usual that the Vice President portion of the story is minor when compared to other pivotal periods in their lives or a broader treatment that covers their whole life. Some of these notable portrayals are as a supporting character within another person's story, when they may or may not been a sitting Vice President.The same parameters were used for the fictional poll but it may seem stronger, mostly due to an abundance of options and the ability to cull even more options.That poll I think still has the same perceived issue as the vice presidential period is just one part of many of these characters' story lines. Poll takers are free to eliminate options that they feel are not worthy or give more emphasis to others based on the focus the Vice President period plays in the character's story line. I agree the situation is less than ideal. But, I am willing to accept the trade-off for portrayals that are well known, deliver star power and still fulfill the qualification.P.S. also note the options that made the honorable mention list are the ones that seem to suffer the most from the issue you are raising: little to no emphasis on their Vice President period within the character's story line. Technically they qualify for inclusion, but were culled specifically for the issue you cite. Regardless, all these options whether they are  a poll option or honorable mention are corroborated by their listing on Wikepedia's list of actors who played the Vice President of the United States or list of fictional Vice Presidents of the United States.Nonetheless, I added the following qualifier to the question, so everyone will be on the same page as to the scope of the question. Which of these movie or television biographical portrayals* of a real-life former U.S. Vice President gets your vote for the best of the bunch? * portrayals include story lines before, during and after their time as a sitting Vice President
(Edited)
2018-12-10T21:40:41+00:00

There is no reason why the characters need to be the primary focus of the story, so I think there would be enough options for a poll. If there aren't enough real-life portrayals of sitting VPs, you could just combine them all in one list.
2018-12-11T10:49:08+00:00

Seems to be matter of where to draw the cut-off line by limiting the scope. I think once you eliminate that a dominate Vice President portrayal poll with single options isn't feasible with single answer options. You have already chosen to relax your standards and make some compromises by adding imperfect options. At that point, for me it about creating an interesting answer pool, while still being true to poll's intent and spirit of the premise.I will give it some further thought. Are these the answer options you have an issue with: Frost/Nixon, Rough Riders, Night at the Museum: Battle of the Smithsonian, Path to War, Dick, Give 'em Hell, Harry!, Jefferson in Paris, Secret Honor and Saturday Night Live, Steve Martin/Tom Petty & The Heartbreakers?I like the separation between real-life and fictional, Part One: Second Bananas — Real-Life U.S. Vice President Portrayals and Part Two: Second Bananas — Fictional U.S. Vice President Portrayals. I think those two groups share a lot in common within their distinct groups and are a fairer comparison. Even, it meant each question having just 10 answer pools, I would prefer to keep them distinct as you might in comparing fruits: apples and oranges.
(Edited)
1 year ago

Great suggestion, I forgot that one. Thanks
1 year ago

Thanks, I now have some options, where I had none before. Your help and feedback is appreciated. The toughest one to find is Tom Arnold guest-star role as Vice President Arthur Crandall on BET's The First Family.
(Edited)
1 year ago 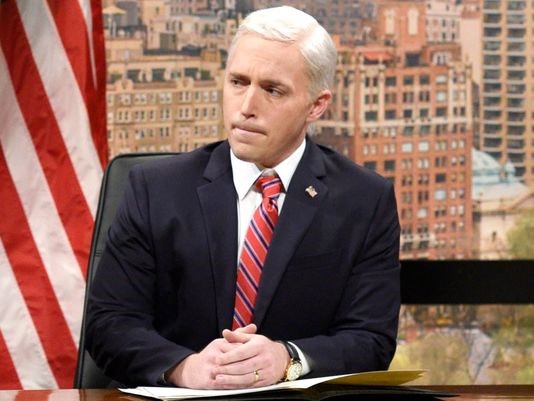 I think answer option #27 is the next best thing.
8 months ago

NATIONAL VEEP DAY - August 9 - National Day Calendar is just around the corner on August 9th.In honor of NATIONAL VEEP DAY, August 9th, a tribute to U.S. Vice President portrayals. 2019's National Veep day is special, given it is in the wake of both the final season of Veep (2012) and the Oscar campaign behind Vice (2018). In celebration of all those who have portrayed these important second bananas.
8 months ago

NATIONAL VEEP DAY according to the National Day Calendar is August 9th and celebrates U.S.Vice Presidents.
8 months ago

I gave her some thought, but decided against Laine Hanson from 'The Contender' (2000). Since it is left unresolved in the movie, although one could assume she was finally confirmed. I will give it some further thought,since the movie is all about the Vice President position maybe with the (assumed) caveat.Final Scene"President Evans addresses Congress, where he chastises all Democrats and Republicans who blocked Vice President nominee Hanson's confirmation. He explicitly calls out Runyon, who leaves in humiliation. Although he declares that Hanson had asked for her nomination to be withdrawn so he could finish his presidency with triumph over controversy, he remains adamant and calls for an immediate confirmation vote. Congress applauds." Joan Allen The Contender Vice President Laine Hanson* nominee (assumed confirmation)added 08 August 2019
(Edited)
8 months ago

Re: the real life veeps...'Tough call. For me, it's between Langella, Harrelson, or Dana Carvey. 'Some lovely and also hilarious performances in this list.Could you update the intro a bit?  Below are a few suggested edits, including updates but also two other little changes:... given it is in the wake of both the final season of Veep (2012) and an Oscar win for Vice (2018). In celebration of all those who have portrayed these important second bananas, which of these movie or television biographical portrayals* of a person who is or was...('Took out "will be" because we unfortunately don't know who will be, lol.)
2019-08-17T20:01:11+00:00