And actresses. Which is your favorite memorable role? Suggestions: Need 7 Female characters please.

ah, missed that part
7 months ago

I'm gonna give you credit for this because your suggestion jogged my memory.
Carol Kane made me think of Susan Sarandon from Rocky Horror
7 months ago

Waiting for Mrs Hudson to clear.... 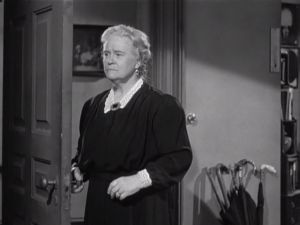 Rachael, played by Sean Young, was the romantic lead in 'Blade Runner.' She was a lead actor and the role was definitely not a character role. I love character actors and character roles but I don't think she fits it at all. Trinity (Carrie Anne Moss) was also the romantic lead. Off the top of my head, I think of Catherine Martin, portrayed by Brooke Smith, in 'The Silence of the Lambs.'  She received a lot of acclaim for that performance and it's certainly a smaller role and very memorable. Can anyone hear the song "American Girl" now and not think of her? : )Boo / Robert Duvall is the perfect example. Even though Duvall became a leading actor, he was a character actor then at the role and his performance fits "memorable character role" perfectly. He'd get my vote.
7 months ago

Thanks, but she is the main character, and is a bona-fide Star.Looking for strictly character actors. Not actors playing a character.A poll for the most recognizable of the actors that you don't think of in a lead role, but are etched in your memory for a particular role.
(Edited)
2019-09-17T23:52:25+00:00

XD, I thought that a Character Actor was an actor that plays a Character.
3 months ago

Hi Ed, 'good list!Could you delete "And Actresses in Movies" (actresses are actors, too, so it's not needed) If you want to keep the reference to movies, you could add it to the question:Which is your favorite memorable role from movies?Thanks :)
2019-11-11T07:54:48+00:00

Wow I was Slow Slow Slow!!
4 Minutes instead of two!
Thanks
2 months ago

Whoever thought up this poll must be very young. Deborah Kerr a character actress? She was one of the top actresses of the '50s and early '60s. She received 6 best actress Oscar nominations, including one for "Heaven Knows, Mr. Allison". By the way, she gets star billing, not Robert Mitchum. They made 4 movies together and she always got top billing. I recommend a little research before making up these IMDb polls.
2019-11-14T20:13:09+00:00

Hey.Thanks.I goofed on that one.I realized it too late.I'm not young.I know who Kerr is.A simple why is Kerr in your poll would have sufficed.A history of who she is was not necessary.I suggest you not tell us about recommending research, when we do it on a regular basis.To Err is Human. To scold one and point out an Err is??????????????Cheers Federico

Examples of actors transitioning towards character actor roles from the leads ones due to age are not that rare, though.