This conversation is no longer open for comments or replies and is no longer visible to community members. The community moderator provided the following reason for archiving: Reluctantly archived at the request of the author.

Who is your favorite starring character in an Alfred Hitchcock film?Note: Remember, the character, not the actor.List: https://www.imdb.com/list/ls096124383/Poll:

Melanie Daniels.  While I'm here I may as well bring up the allegedly cursed Barbie! 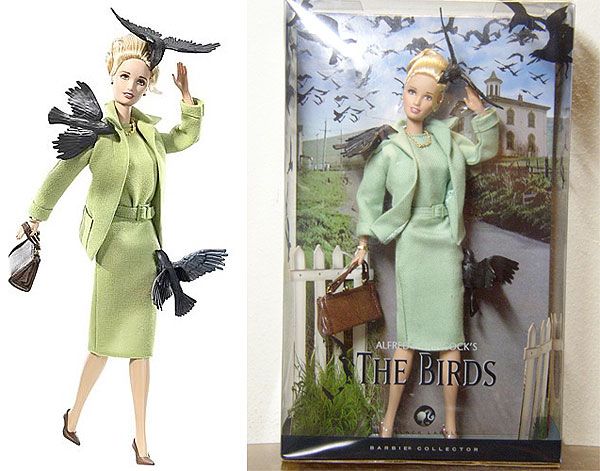 There is no list. I will not be toyed with by you or anybody. This is never going live and you know it. So why are you here? Don't you have something better to do? You know this is supposed to be all about fun. Well, you are the opposite of "Fun". If your intentions are to drive me away, just ask. I will see to it that I am gone along with all polls. And I do mean "ALL" polls. This will cease to exist. I have been collecting data since my initial dustup. You and the other members ignored me for six months, then like nothing had ever happened you all acted normal. But the environment here is toxic. There are a few rules, but not enough. You champions rarely comment other than to correct spelling or grammatical mistakes. Dan seems to be the only one that cares to comment on a regular basis that he likes something.If you are going to continue to "Champion" here, then PLEASE get a better attitude sir.
(Edited)
2020-04-07T18:05:03+00:00

Ed, I never believed you thought I were unreasonable. I only mentioned the Marion Crane case as I had doubts about it, and I asked as I do with other suggestions and authors when that happens.
Once you share your thinking and we know you considered the options, then there's nothing wrong with the poll and it has many chances of going live, that's precisely why the champions are leaving comments, because it is being considered.
2020-04-10T23:15:51+00:00

cinephile, there seems to be some odd magic for antagonist or villain to appear for 16 minutes in the movie. That is also the exact number of minutes Arnold Schwarzenegger is onscreen in The Terminator (1984) according to my estimates (a bit proud of that hobby and can't stop plugging the results, sorry). Although overall screentime of character if we count in all the stunt doubles and special effects is a bit more - 26 minutes. Which still feels like a lot more plot-wise, considering it's a 107 minute movie. It's amazing how much impact a character can make in a movie, despite essentially only being a fairly small part of it.
(Edited)
4 months ago

Lets put this Marion thing to rest.My opinion is not just mine. This respected site says pretty much the same as I.I just do not make things up. It is from a lifetime of watching movies. My opinions are usually spot on, yet I'm second guessed left and right. How can I possibly know what I'm talking about? I've only been making polls for two years. Yes, two. But I have been at the school of film for 50+ years. I just do not watch Chris Nolan Films! I like Nora Ephron, John Ford, Michael Mann, and a thousand others. I am well rounded. Yet my opinion is constantly barraged by those that are younger than I, that disrespect my intelligence and seem to think they know better. I listen. I disagree. I defer when there is a particular genre of film that deserves inclusion. But I do not dismiss those I respect out of hand.Ruby and Pencho. I respect both of you tremendously. But Ruby the "we still can ignore unreasonable people on GS. (Yay!)  : )" actually hurt my feelings. There is nothing in that statement to "Yay" about or make light of. Maybe you were in a playful mood, but I don't yay about standing my ground. It is not an I win you lose thing. It is to me a "We all win". Standing up for what you believe is very important to me. To cheapen it with offhand comments is???? I'm by no means a PC kind of person, but I do make an effort with all persons to make them understand new concepts. You should know this being a teacher. While I'm not a teacher, I teach new things to people every time I'm in contact with someone that would like to learn. You know that special feeling you get when you really reach someone and expand their knowledge. It is the most awesome feeling on the planet. Oh making people laugh is right up there too.Just my ramblings!Cheers to both of you.:):)

List of Psycho characters, along with pictures when available. These characters from the movie Psycho are listed according to their relevance in the film, so the top of the list features mostly lead characters. From main characters to minor roles and cameos, these characters are really what made the movie stand out as a great film. The names of the actresses and actors who played each role are also included below, so this Psycho character list is a great way to find out who portrayed your favorite role.

The list you're viewing is made up of many different items, including Sam Loomis and Lila Crane.

If you're asking yourself, "What are the character's names in Psycho?" then this list will answer your question.

If you want to view this list of Psycho roles alphabetically, then click on "Name" at the top of the list. Is one of your favorite characters missing? Feel free to add them by typing in their name at the bottom of the list.As you can see here, Lila is a scant 12th on the list of importance. This is why she is not in the poll.