Who has influenced us more: Isaac Newton or Albert Einstein? 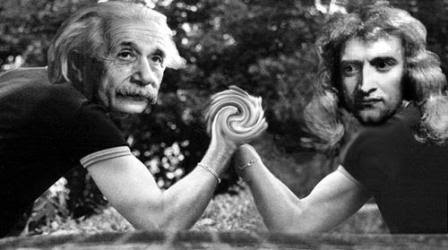 According to my completely scientific mesure of their biceps Einstein is stronger than Newton.

More seriously, I believe that Newton you can't compare both. To simplify my point of view, both were from a very different era so their discoveries didn't have the same impact on our society. If I really had to make a choice I would vote for Newton.
2 months ago

On the other hand, if Newton hadn't discovered gravity we might be floating around in the air right now.
2 months ago

I'm not asking who's the most influential person of all time. A similar poll already exists (created by you Elmo, lol).It's merely a duel between Einstein and Newton.If it was a regular PS, I'd have considered your suggestions. But it's a face-off. I just don't want to include anyone else. Plus, we all know, even if I add more options, the top two voted people will be Einstein and Newton. Don't you agree?Proof: Einstein and Newton are the most influential and most famous scientists of all time anyway. (I've searched for more online articles like this. The top two on their lists are these two.)

I hope you understand.

BONAFIDE BOSS,Albert Einstein was my role model growing up. However, I will without hesitation state that Sir Isaac Newton is the most influential.
2 months ago

Newton. I love Einstein, especially because of his worldview and I think that he has influenced us morally in a more direct way but Einstein stands on the shoulders of Newton in terms of physics. Everyone stands on someone's shoulders and it doesn't necessarily mean that they're less influential at all but, in this case, I think Newton has definitely been more influential.
2 months ago

From Newton, we know that:

From Einstein, we know:

That's how they discovered gravity.