Robby the Robot Born July 1st 1955 (63 Years Old) has had an interesting life in pictures. As a well recognized prop, his longevity as an actor has covered six decades. He has worked with Hollywood's "A" List Actors such as Walter Pidgeon, Leslie Nielsen, Peter Lawford, Bob Denver, Anne Francis, Peter Falk, & Lynda Carter just to name a few. The consummate professional he was, Robby did all his own stunts, and never used stand ins. Thought he was stood in a lot! This probably lead to his Multiple Personality disorder! Of the 3 choices, what do you believe lies ahead for our Rustic Robot?

As you can see here, Robbie is going over his lines with co-star Anne Francis on the set of Forbidden Planet (1956)

If this whole thing does not make you smile, there is no hope left. 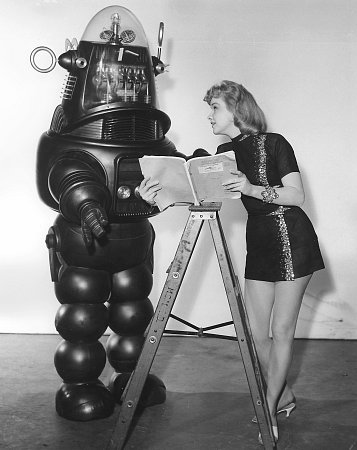 I like the title quite a bit but it is long, which could be problematic for a few reasons. I'd suggest a briefer version:Fun Face-Off:  Robbie The Robot at 63(Since there are only three choices, it qualifies as a face-off and having that in the title frames and orders the poll a bit.)
2018-09-05T14:35:42+00:00

Reliable Rustic Robby at 63
Re-did the whole enchilada!!! Take a Peek
2 years ago

I Love You All This Much! I can't believe nobody including me noticed till now!
Good catch.

Havin fun is what I do best!
Thanks
(Edited)
2 years ago

You have some typos:This probably lead to his Multiple Personality disorder.#1:  It ended badly!#4: Unfortunately he currently has an off switch.