Seems to be the same film (I have all these movies, but it has been years since I saw this one). As with some other Godzilla movies, re-edited ”U.S. version” was also released (from Wiki):

”... a heavily re-edited American adaptation of the film which includes additional footage, and features Raymond Burr reprising his role from the 1956 film Godzilla, King of the Monsters!.”

in the OP
7 months ago

wikipedia has section on why godzilla 1985 exists
7 months ago

There is a Japanese version and a US version that is dubbed with the one exception being that the US version is re-edited and has Raymond Burr inserted into the cast. He naturally speaks English. They are considered separate titles. This confirms E-Boys assertion.The Poster for the US Version I believe is incorrect at a quick glance.This should be the correct Image. 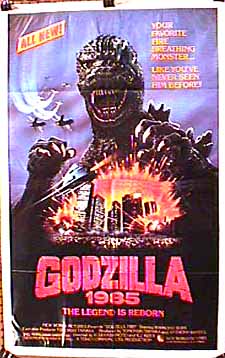 that's what i've said in op

agof.
What Country are you in?
7 months ago

If you believe that the US version does not warrant a separate listing please list any evidence you have to support this on this thread and we can evaluate from there.
Thank you in advance.
2019-07-28T11:18:46+00:00

This is the ”U.S. version” (actor Raymond Burr only appears in that version, and there are some other U.S. credits like the 2nd director, dop and editor):
https://m.imdb.com/title/tt0087344/

If the run time of that version is currently wrong in IMDb, you can correct it. Just make sure you’ve the correct run time. Some of these run times listed on IMDb can be slightly off or refer to some other version.

the "us" version is called "Godzilla 1985", has different runtime and was released in 1985they can't be under the same ENTRY with original gojira 1984 and\or international The Return of Godzilla 1984. i need a decision of the Mod before i start doing anything. if i just rush in and delete half of the information from tt0087344 to move it to tt9015178, moderator won't allow the change even if i try to explain the reason.

this is such complete convoluted mess that you can't even edit anything without triggering user editor collapse
you can't change dates or titles, you can't add alternative titles IMDB refuses to eat changes
7 months ago

Two different entries of (essentially) the same film will of course cause some issues, especially with AKA titles, run times, release dates and such. Some U.S. prints are using ”Godzilla 1985” title, while some others might use ”Return of the Godzilla”.

Toho has been notoriously difficult when it comes to licensing their full Japanese versions with English subs (recently Criterion made a deal with Toho, though, but is probably using the older HD masters), so there are all kinds of VHS/DVD/Blu-ray releases of these various U.S. versions. So that’s a ”mess” itself.

I personally wouldn’t change anything until IMDb confirms the status of the title: do they want two different versions (original Japanese and the U.S.) listed separately, or only one (with U.S. version listed only to ”Alternate versions” section). There’s no real point of making edits/corrections before that, IMO, at least.
2019-07-28T14:31:31+00:00

”Return of the Godzilla”. is the full version with english title it's from 1984 ”Godzilla 1985”  is usa marketing version with different footage and dr pepper product placement

No it hasn’t. I have to give up now, good luck.
6 months ago

An Update for anyone interested. It appears that the AKA page is correct.