Face-Off: Riddlers of "Batman'' that Never Were

Poor old villain Riddler of "Batman" fame. The Joker seems to get the spotlight every time! He has been dropped more times from movie adaptations of Batman than a wet bar of soap in the shower! Holy Cow Batman! So this poll asks an obvious question.Who do you think would have been the best Riddler that was up for the role that never was?List: https://www.imdb.com/list/ls095993317/Poll:

The late and great Robin Williams!
9 months ago 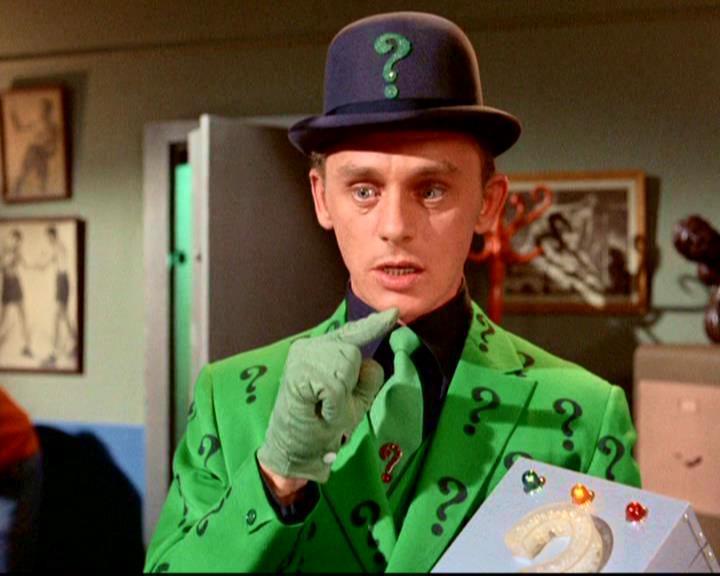 cinephile, have you ever read the original DC comics? Because it is a great character with decades of appearances in the comic books and quite a few famous storylines behind his belt. "No contents" (very broken English: "no content" would've been so-so, but content has no plural, it's plural as is) is someone who has like one or two comic book appearances. Polka-Dot Man who will appear in The Suicide Squad (2021) might be considered such a character and still, considering he first appeared in the 1962 he has dozens of appearances in the original comics, something that can easily suffice for characterization of a supporting character in an adaptation. Riddler on his own can easily be used as a basis of several movies. Even "Gotham" which featured him as an evolving main character for 5 seasons only tackled a portion of storylines, themes and moments with the character that could look great onscreen.

It seems that you're judging these characters irrespective of their original upbringing, just based on adaptations. Not a great thing to do. You can't judge Bane only by Batman & Robin (1997) and The Dark Knight Rises (2012) and even if you throw in all the animated and televised appearances and/or video games they are really partial. And... If you like that universe and yet consider comic books something which most "adult" people should be behind, well, it's something to reconsider. Not only comics and graphic novels have plethora of great fiction, they're not merely "books for kids", they've evolved into an effective form of storytelling different from both

Moreover they could be of great help in learning languages. I'm not trying to offend you, but your English can use a bit of that. I'm speaking from experience there: English is not my first language and comics were a huge part of learning it for me, great for versing yourself in structre, logic, everyday use. From time to time they actually still manage to expand my vocabulary as much as literature, scientific research and many other things do.
2019-10-12T00:21:25+00:00

Nikolay.
Thank you.
Yesterday, Cinephile tried to explain what defines the Mob/Organized Crime. A very poor explanation on his part too I might add. He was very rude when I turned down his suggestion. He is continuing his displeasure here also. But his apparent lack of knowledge makes it frustrating to deal with him on a reasonable level.
Thanks for your eloquent explanation of the character as a whole. I was in no mood to say what you said.
I am no fan of comics as you are. But that does not mean I am bereft of the importance of the history of many characters in the comic book world. The Riddler is on of those comic book characters that have not been given their due in motion media. Gotham is that exception. I for one loved the Riddler on Batman (1966) and at the time he was my favorite Villain! The Joker (Caesar Romero) was a distant 2nd to Frank Gorshin. But the Joker was on more.
To dismiss a character because they have "No Screen Time" is narrow minded.
Thanks for supporting the Riddler.
Cheers
:):)
2019-10-12T01:24:03+00:00

Reply to Nikolay: My English is bad, I admit it, but I do efforts, I used capitalizemytitle.com and Grammarly more often, I take English courses, and I watch Netflix only in English,  For some characters like Superman, while they are good in comic books, they are hard to adapt to movies. So for me, if you talk about Riddlers that never were in the cinema, I have to base my opinion on past interpretations. I don't like to way you assume that, I didn't read any of the Originals DC comics.Reply to Ed Jones: You probably were offended by my dislike picture, as you may know, I disagree with your opinion on Heat. Maybe, I insisted too much. when I posted the Dislike image, it was not to offends you, I just wanted to close the debate, I thought that you wouldn't answer that would be it, but you replied twice to my dislike button image (I think that it was excessive). Especially, for the second reply that was, in my opinion, not relevant to the subject. I think that here, I didn't continue my ''displeasure'', I was just expressing my opinion of the character. My ''apparent lack of knowledge'' as you said, (OK I didn't know what was Anime) (OK my knowledge of English is bad), but sometimes I like to look a bit more stupid than real. In fact, I won a ''Génies en Herbes tournament, when I was young ( we were the best of our group of age in the country.) so I have some knowledge. I think this is all I had to say.


I don't want to begin another debate, in the earlier post I was just saying that IN MY OPINION,  there is not enough ''content''.

cinephile, I'm sorry if I seemed impudent or passive-agressive, as well. I might admit that my writing might get slightly too passionate and/or defensive when I'm writing on things I'm passionate about. Great to hear that you're making efforts and succesfuly pursue language learning as well as learning new things here.

I can also very much relate to appearing less than smart despite having sufficient accolades and knowing that you do have sufficient intellect. There is a myriad of mistakes that haunt me to this day that people probably either forgot or never noticed in the first place: everything from simple misunderstandings in social interactions to word mispronunciations stays with me for years and sometimes decades. It's not entirely helping that I chose to be a filmmaker and I have YouTube channel, so some of those are nearly immortalized. I rewatched my video essay from January of this year the other day and I was nearly kicking myself for the fact that my "add" and "odd" sond identical for no reason, among other things, at least five of such. The kicker is that I have Bachelor's, Master's and I'm a PhD candidate (hope to finalize that in November). I have awards in literature, film, science and other fields, so I've proven time and time again that I'm smart, but I still feel like I'm not more often than I'm not. I guess it's natural: the more you know the more apparent is that you'd love to know more and have both theoretical and practical knowledge.
9 months ago

i love the idea of mickey dolenz just because it's mickey dolenz...but...the riddler has always been my favorite 'villan' for batman but people forget who he was...he wasn't manic like jim carrey or even how robin williams would have been...he's intelligent and duels with batman for the game itself...not the prize...i believe the perfect casting would be john glover...he would propose a great foil for batman...
(Edited)
2019-10-11T21:48:06+00:00

I was going for people that were actually considered. Thinking of doing a poll about future Riddler Casting. Problem is is there is a rumored Riddler for The 2021 Batman Movie. Ruins the concept! May do a Harvey Dent/Two Face poll. Not sure yet. May do a Perry White Poll too.
2019-11-14T08:15:59+00:00

What has been sitting on Funk and Wagnalls porch since noon today?
6 months ago

The Bump that was never there
3 months ago

A Riddle: What is another word for great, combined with a device made of long round aluminum in homographic terms that is?
(Edited)
3 months ago

Michael Jackson as the Riddler? That's insanely intriguing. Robin Williams as Riddler? It seems a tad too on the nose.
3 months ago

Doesn't matter. No one could do better than Frank Gorshin!